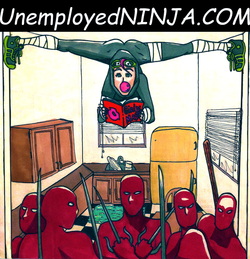 Everyone seeks a purpose in life. Everyone has to pay bills. Not everyone...is a ninja!

SYNOPSIS: How does one become an Unemployed Ninja? Receiving her 5-year pin should make Liz a lifer at ASSASITEMPS©. But after completing an assassination mission that requires her to kill one man, but results in the deaths of fifty-one people, the empathetic Liz feels she must quit her ninjaing job to maintain her sanity. In this economy?! Yes! Despite the shock to her boss, the worries of her family, and with the support of her friends, Liz dodges old enemies and explores a new life path. www.UnemployedNinja.com 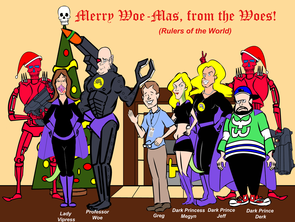 A family of supervillains has vanquished the world’s armies, annihilated all superheroes, and conquered the planet...
but still can’t get along with each other.

SYNOPSIS: Woe Is Me follows the world’s most diabolical, dysfunctional family, the Woes. There’s Professor Woe, a brilliant cyborg who worries his life has peaked now that he’s taken over the world. His wife, the reptilian Lady Vipress, is forced to handle the planet’s day-to-day operations. And their children have no interest in the family business. Their lizard-daughter Melitrix, wants to be the next Paris Hilton. Their older son Drax is only interested in making movies. (He’s won every Oscar in every category since his father came to power). And their younger son Jorn is an aspiring superhero.
Everything changes when Professor Woe reveals a shocking secret: he has another biological son, Greg, the rightful heir to the world domination scepter. Greg, a mild- mannered history teacher, has always wanted a real family, but can he keep the Woes from killing him, and each other? He’s not exactly “tyrannical despot” material, either.